The 2018 Cannes Film Festival slate is so weak, so unexciting, so “are they kidding?” I’ve already paid for my Cannes voyage — RT airfare (LA to NY, NY to Paris), Paris-to-Cannes train ticket, Paris Airbnb, Cannes rental, etc. If I could take it all back and drop it into my bank without excessive sweat or hassle, I would be seriously tempted. It just doesn’t seem worth the outlay. I’d much rather invest in Telluride, which I was going to sidestep in order to save funds.

All of these salacious tell-all stories about Donald Trump‘s roaming schtufenhaufer are sounding not only repetitious but flat. The latest, about Trump tower doorman Dino Sajudin having been paid $30K by the National Enquirer to keep quiet about Trump having allegedly sired a love child back in the ’80s with a housekeeper, is almost disappointing. Speaking for the reading public, I think we need the ante to be upped. We need something grander and more perverse. We need a story about, let’s say, a 2006 menage a six between Trump, Sajudin, the housekeeper, Karen McDougal, Stormy Daniels and the housekeeper’s son. 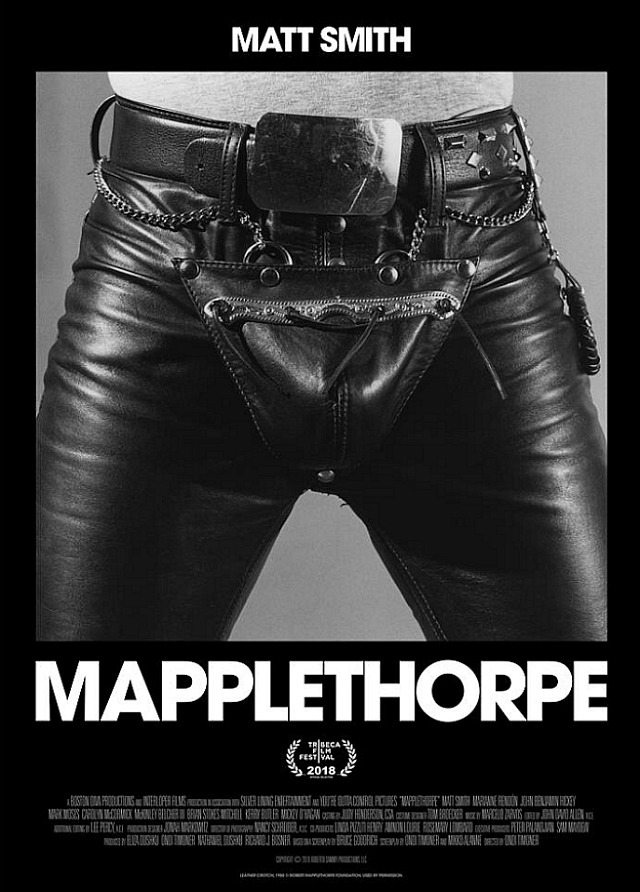 Pic stars Jim Carrey, Agata Kulesza, Charlotte Gainsbourg, Kati Outinen, Zbigniew Zamachowski and Marton Csokas. Principal photography began on 11.12.15 in Kraków, Poland. Under the title True Crime, it premiered on 10.12.16 at the Warsaw Film Festival, and it’s only just opening now, 18 months later. What does that tell you?

From Neil Young’s Hollywood Reporter review: “Spicy real-life ingredients and a terrific international cast are frustratingly wasted in True Crime, in which Jim Carrey — essaying the most serious role of his mercurial career — makes a reasonable stab at playing an obsessive Polish cop tackling that one inevitable last case before retirement.”

Six months from now, when everyone finally gets a peek at Damian Chazelle‘s First Man (Universal, 10.12), the following words from Norman Mailer‘s “Of A Fire On The Moon” (otherwise known as Taschen’s “Moonfire“) might come in handy:

“One could hold the thought that the real function of the WASP was not to create Protestantism, capitalism, the corporation or a bastion against Communism, but that the WASP had emerged from history in order to take us to the stars. How else to account for that strong, severe, Christian, missionary, hell-raising, hypocritical, ideologically simple, patriotic, stingy, greedy, God-fearing, nature-despoiling, sense-destroying, logic-making, technology-deploying, brave human machine of a WASP? It was a thought with which to begin to look at astronauts.”

There’s a problem with this idea, of course. There are few epithets that carry more sting and derision these days than WASP or “white guy.” Nobody with a brain or developed social-political survival skills wants to celebrate anything fundamentally white. At all. Partly because of Donald Trump and the evil bumblefuck culture that supports him no matter what. We’re in the middle of an era in which progressive urban elites are committed to the ascendancy and empowering of non-WASP tribes, partly for equality and decency’s sake and partly as a means of redressing centuries of horrid oppression of said tribes by WASP authority types and Anglo-Saxon culture in general.

So how will a film that will almost certainly raise a toast to whitey accomplishment…how will it fare among terrified-of-their-own-p.c.-shadow critics, which is to say almost all them except for X-factor types like myself? Somehow or some way, the identity-attuned, diversity-above-all crowd (and you know who I mean) is going to try to find a way to diminish First Man because of this. Because Chazelle’s film will almost certainly be saying something thematically that they don’t want to hear, and certainly not celebrate. Trust me — they’re going to go after this film, however good or bad it turns out to be.

I want to say this carefully but clearly: Judd Apatow‘s The Zen Diaries of Garry Shandling, the 270-minute doc I finally finished watching a couple of days ago, might be the best thing he’s ever done. Seriously. The most full-of-feeling, the saddest, the wisest, the most melancholy, the most emotionally affecting.

And I say this as a serious admirer of Apatow’s Knocked Up, Funny People, This Is 40 and Trainwreck, not to mention all the good or near-great comedies Apatow has produced (Bridesmaids, Pineapple Express, Get Him To The Greek, Juliet, Naked). Maybe I’m overpraising, but I don’t think so. All I know is that I began to really miss Shandling after it was over, even more than I did when he suddenly died two years ago.

There is nothing more interesting than the story of a man or woman who started out feeling oppressed or miserable, and nothing less interesting than hearing about how he or she ended up feeling happy or content. That was John Lennon‘s life — he was a much more interesting guy between ’60 and ’74 (his anxious, cutting-remark period, including his lost-weekend alcoholic phase during ’73 and ’74) and an almost dull fellow between ’75 (when he became an obedient Yoko Ono house-husband) and his assassination in December ’80.

Shandling was a zen cat but he never seemed to actually “heal” himself or find a plateau of happiness, not really. He was always unsettled, always edgy and vaguely perturbed about a lot of things. I can’t tell you how much I love worriers and kvetchers. Sydney Pollack was one also.

The best part of Apatow’s doc comes at the very end, when Kevin Nealon delivers an on-stage eulogy: “I think the fact that Garry spelled his first name with two rs…that was a warning he was going to be complicated.

“It was very hard to be Garry. A perfectionist with the highest standards. For years he complained about his house” — a really nice pad above Mandeville Canyon that HE happened to visit a few days ago. “How it was facing the wrong direction, the light wasn’t hitting it right.

“He did hate his house. For years he complained about it. This beautiful amazing home, in this gorgeous park-like setting, with stunning views of the Pacific Ocean, continued to be Garry’s albatross. [But] that was Garry, that was Garry.”

The Zen Diaries of Garry Shandling is much better than it might sound.

No Comments
There Once Was A Dutchman Named Parker

I’ve only just asked for screener access to Thom Zimny and Priscilla Presley‘s Elvis Presley: The Searcher (HBO, 4.14). In the interim here are excerpts from Jon Pareles’ N.Y. Times review: “There are no fried peanut butter and banana sandwiches. Nor is there a television with a bullet hole in its screen. Drugs, an unavoidable topic, are mentioned in sympathetic tones as an overworked performer’s self-medication.

“A two-part, three-hour documentary that begins airing Saturday on HBO, Elvis Presley: The Searcher strives to rescue the Presley story from its tabloid side. Instead, it presents a biography of an artist and musician who was both spectacularly gifted and unconscionably misdirected. Guided by his own ideas and instincts, he transformed 20th-century culture in the 1950s. But afterward, treated by his manager as a commercial workhorse, he spent years making trivial movies and performing as a nostalgia act.

“[The doc] can’t escape the familiarity of its story. But it focuses, with purposeful tunnel vision, on Presley as a musician and performer. The first half lingers in the glory years of the 1950s, reconstructing how the young Elvis absorbed and studied all the music and showmanship he could: country, blues, pop crooners and both black and white gospel, with rousing vintage footage of singers including a sweaty, ferocious Howlin’ Wolf and a gospel workout from the Reverend Archie Dennis Jr.

“It also presents Presley’s relationship to African-American music as one of affinity and appreciation, not exploitation.

Bruce Springsteen: “Elvis’s music pointed to black culture and said, ‘This is filled with the force of life…if you want to be an American, this is something you need to pay attention to.”

“He wiggled his legs, hips and shoulders, too — onstage and then on television — inciting screams among young women and a moral panic in the older generation.

This is special. Seven minutes and 45 seconds of Manhattan in the summer of 1911 — 107 years ago. The mint-condition print, slowed-down speed and added sound makes a huge difference. Posted on 4.7.18 by Guy Jones. Captured by Svenska Biografteatern, a Swedish film company that operated between 1907 and 1919. Imagine if someone were to colorize this footage just so.

From Michael Rechstaffen’s 3.14.18 SXSW review: “Visually atmospheric but tonally all over the place, Hot Summer Nights” — what a banal-ass title! — “has much to appreciate but ultimately possesses the sampler-platter vibe of a director’s demo reel.

“Things pick up a bit as destructive Hurricane Bob is gathering strength, but by that point, the all-too-apparent two-hour running time is also weighing heavily without enough plot to fill it.

“Director-writer Bynum admittedly coaxes sensitive performances from his photogenic cast, especially Chalamet, Roe, Monroe and Emory Cohen as a self-styled thug, and makes for a terrific music curator, given the ’60s and ’70s song choices that permeate many of the scenes. In the future, should he manage to add a little more discipline to the mix, his sophomore effort could hold considerable promise.”

45 Comments
Seriously — This Is The Cannes ’18 Lineup

Is this the weakest Cannes lineup anyone can remember? Kinda feels that way. Telluride’s Tom Luddy and Julie Huntsinger are having champagne for breakfast. I know titles will be added, of course, but right now, what a letdown. Lame. Weak tea. The Netflix withdrawal was devastating, decimating. If the festival could have at least shown Roma, Norway and The Other Side of the Wind, things would be looking somewhat better this morning.

I’m leaving home for three weeks, travelling thousands of miles and laying out roughly $4K to see these five significant films plus whatever the noteworthy surprises may be.

No Luca Guadagnino (Suspiria will play Venice/Toronto), no Laszlo Nemes (Sunset), no Nuri Bilge Ceylan (The Wild Pear Tree), no Brian De Palma (Domino), no Mike Leigh (Peterloo), no Paolo Sorrentino (Loro), no Jennifer Kent (The Nightingale), no Claire Denis (High Life), no Alfonso Cuaron (Roma), no Olivier Assayas (E-Book), no Carlos Reygadas (Where Life is Born), no Paul Greengrass (Norway), no Terrence Malick (Radegund), no Woody Allen (averse to showing A Rainy Day in New York as this would involve press badgering) and no Orson Welles (The Other Side of the Wind). 15 might-have-beens!

What’s the point of re-mentioning the out-of-competition screening of Solo: A Star Wars Story?

No Lars Von Trier for now, but The House That Jack Built, an envelope-pushing serial-killer drama with Matt Dillon and Uma Thurman, may be announced as an add-on.

Obstinate French exhibitors and that prehistoric French law insisting upon a three-year window between theatrical and streaming are the villains this morning.

From Variety: “The competition program includes just three female filmmakers, prompting Frémaux to reiterate his position that ‘the films that were selected were chosen for their own intrinsic qualities,” not the gender of their directors. Acknowledging the importance of the #MeToo and #TimesUp movements, (i.e., “The world will never be the same again, and we will question our own practices about the gender parity” in salaries and jury representation), Fremaux stressed that “there will never be a selection with a positive discrimination for women” — i.e., a quota system.