I think it’s kinda great that Francis Coppola, who will turn 80 in three or four days, is really and truly planning to direct Megalopolis, which he’s been preparing for many years and almost got rolling 18 or 19 years ago.

Pic is “the story of an architect’s battle to build an ideal world…a hero’s fight to realize his dream to build a city of the future,” Coppola said in ’01.

On 9.16.15 One Room With A View‘s David Brake described the lead character, Serge Catalane, as “a genius architect, controversial icon and lover of debauchery.”

Coppola to Fleming: “I plan this year to begin my longstanding ambition to make a major work utilizing all I have learned during my long career, beginning at age 16 doing theater, and that will be an epic on a grand scale, which I’ve entitled Megalopolis. It is unusual. It will be a production on a grand scale with a large cast. It makes use of all of my years of trying films in different styles and types culminating in what I think is my own voice and aspiration.”

Megalopolis is “not within the mainstream of what is produced now, but I am intending and wishing and in fact encouraged, to begin production this year,” Coppola said.

Due respect, but inspiration and the chance to deliver a profound artistic creation is usually something that passes through you, like stormy weather through Kansas. You either manage to do something with it or you don’t, but all film artists of note have peak periods in which they’re channelling Godly currents. Mostly this happens in their late 30s, 40s and 50s. There are always exceptions to the rule, of course, but it is not an expression of disrespect to say that Coppola is well past his spiritual and creative grace period, and that he’s almost certainly not going to get it back at age 80 or 81. He might, yes, but look at the odds.

Coppola’s last ambitious failure was 35 years ago — The Cotton Club. His 21st Century indie films — Youth Without Youth, Tetro, Twixt — were entirely negligible. He obviously had a monumental run in the ’70s. His last ambitious mixed-bagger was One From The Heart, which premiered 38 years ago. He’s had his day. We all know this.

I nonetheless find it wholly admirable and salutable that he’s planning to make Megalopolis soon. All power to him.

If some kind of LGBTQ cultural dictatorship was to seize power and straights were more or less obliged to either be closeted or “get with the program” in the same way that The Lobster‘s Colin Farrell was told to find a girlfriend or else be turned into an animal…if the message from on high was that I’d be better off if I could find a boyfriend and at least pretend to be gay, I would try to find a guy who looks like Cary Grant did from the mid ’30s to mid ’40s 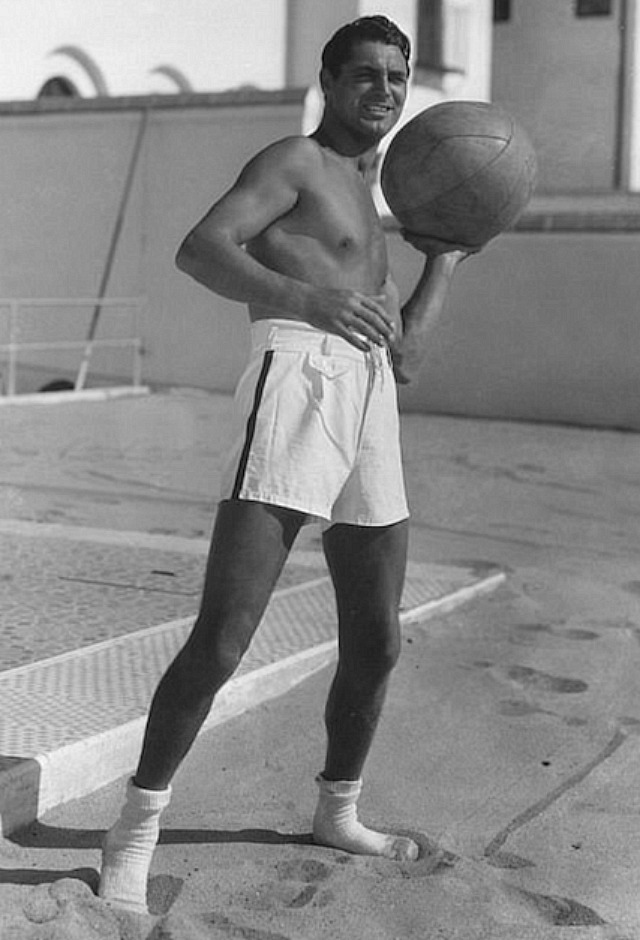 I feel a little bit sad that Inbox — Google’s personalized” mail app that I’d been using on my iPhone since late 2014 — was discontinued yesterday. Granted, the new Gmail app is a little more Inbox-y — spiffier, more colorful, more here-and-now. Not the end of the world, but I just thought I’d say “farewell and adieu” to an app I was fairly happy with. 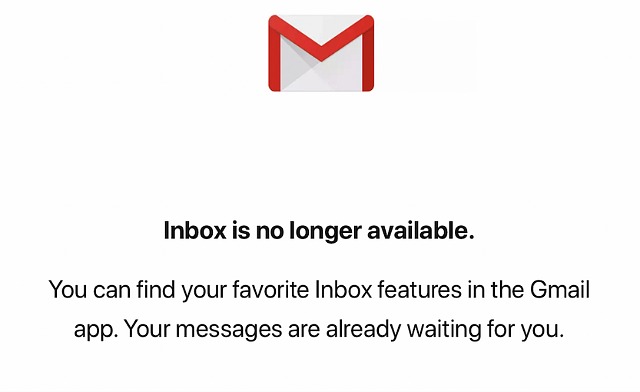 “With his hair grown out into a sort of Bert Convy ‘do, Efron looks the part just fine, and he uses his insidious charisma to grab us from the start, when Ted, haunting a college bar in Seattle in 1969, meets Liz Kendall (Lily Collins), the single mom who will become his romantic and domestic partner throughout the years of his crimes.

“Ted is a kind of actor, a maniac playing a role, yet doing it with such sincerity and flair that it’s not just a role. It’s the person a part of him wants to be. Ted is the sort of ladies’ man who turns heads when he walks down the street. He’s a charmer, a sexy-eyed player, a catch. But he’s a shrewd enough manipulator to know when to play up that image, and to know how to play against it as well. He woos the naïve, fawn-like Liz, who thinks no man could be interested in a secretary with a small daughter, and when he’s in her presence he puts on a major show of being kind, warm, doting, and gentle.”

Terrence Malick‘s Radegund, a German-language drama about an Austrian guy who was executed for refusing to fight for the Germans during World War II, has been re-titled A Hidden Life. What exactly was hidden about the life of Franz Jagerstatter? Nothing I can detect from what I’ve read about the man, but Malick’s life…there‘s a definition of hidden.

Other Cannes ’19 beliefs and suspicions, courtesy of Jordan Ruimy: (a) James Gray‘s Ad Astra is a no-go; (b) Tarantino’s editing of Once Upon A Time in Hollywood is taking longer than expected, which is causing some concern; (c) Elton John is allegedly expected to attend a Thursday, 5.16 screening of Rocketman, which means, if true, that the musical biopic won’t be the opening nighter; and (d) Pablo Larrain‘s Ema will likely have a competition slot. 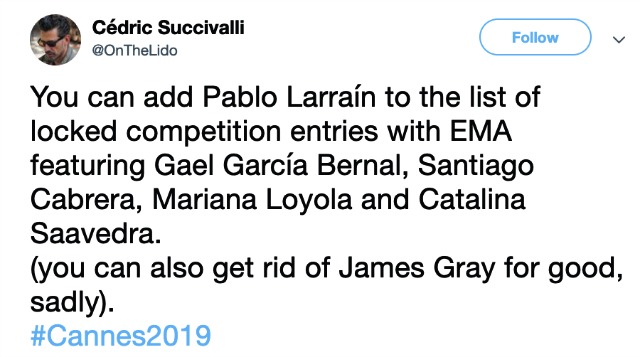 So Mick Jagger‘s heart-valve operation won’t involve a scalpel cutting into his chest and the doctors prying open his rib cage. It’ll be a non-invasive procedure called transcatheter aortic valve replacement, or TAVR. The procedure “wedges a replacement valve into the aortic valve’s place” through a small tube without having to remove the old valve, according to the American Heart Association…the tube can be inserted into an artery in the groin or via a small incision in the chest…patients typically stay in the hospital for only a couple of days.”

Oh, for the pre-Aftermath days when Jagger wasn’t doing his standard rooster-on-acid and was more or less holding his ground, just standing there and focusing on the lyrics while executing subtle little moves.

The greatest Rolling Stones concert I ever attended was in summer ’75 at Madison Square Garden. It was the tour with the movable star-shaped stage, and which began with the opening bars of Aaron Copland‘s “Fanfare for the Common Man.” Granted, the Stones had a vague common-man aura when they were mainly performing covers of classic blues numbers, but after they came into their own with Beggar’s Banquet (’68) they began to project a classic rock-splendor image –elite, highly perverse rock ‘n’ roll gods living lives of grand debauch. Associating their brand with Copland’s anthem in ’75 was some kind of chortling in-joke.

The second best Stones concert I attended was at the Pavillon De Paris (Les Abattoirs) on 6.6.76. Les Rolling Stones aux Abattoir! The show was due to start around 9 pm — they didn’t take the stage until well after 11 pm.

I can’t be the only one who’s had it with Warner Bros. opportunists constantly returning to the same old drafty barn to milk the same old cow. 30 years ago everyone thought Jack Nicholson had knocked it out of the park with his giggling creepo. But along came Heath Ledger’s version in 2008…the best, the absolute summit, the most delicious and diseased. And then eight years passed and the Joker was back in the form of Jared Leto…c’mon! And now a fourth version is upon us, and I’m not even thinking about Ceasar Romero.

The Joker script (co-written by Scott Silver and co-director Todd Phillips) is an origin story, but Joaquin Phoenix was 43 or 44 years old when they shot it last year, and with his constant cigarette-smoking Phoenix looks at least 49 or 50. Who ever heard of an origin story performed by a weathered, somewhat haggard middle-aged guy with an embalming-fluid complexion?

It’s one thing to be a tormented Donnie Darko as a child, a teenager or even an early 20something, but a 40something who’s nudging the big five-oh? And how does a mopey loser who’s been putzing around for 45 years…how does this guy suddenly morph into a notoriously demonic crime king?