Or, if you will, just desserts.

I know I shouldn't laugh! 🤣🤣pic.twitter.com/nwWlNfCobU

Tuesday update, 12:30 pm: Various consultations have happened, and much fretting. A Manhattan guy has been hired to try and figure out the comment problem, and there are plans afoot to install a brand new version of the Armory theme, the most recent version of which was installed in 2016.

And therefore it’s finally recognized, a decade after the fact and to the voting Academy’s eternal shame, that the 2011 Best Picture Oscar shouldn’t have gone to The Fucking Artist With a Cute Little Dog but to Bennett Miller‘s wise, seasoned and spiritually humming sports saga, Moneyball.

I knew the truth of things back then, but the mob was in love with Michel Hazanavicius’ black-and-white gimmick film and there was no talking them out of it.

Moneyball, Alexander Payne‘s The Descendants and Woody Allen‘s Midnight in Paris are the only 2011 Best Pic nominees that have stood the test of time. The Artist sure as hell hasn’t. And Extremely Loud & Incredibly Close, The Help, Hugo, The Tree of Life, War Horse…no need to re-bash but they weren’t good enough. 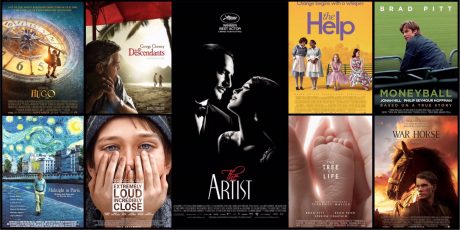 Ask any film lover about the guy whose head was sliced off by a plate of glass in The Omen, and they’ll say “of course…yes.” Ask about the man who played Jack the Ripper in Time After Time…the guy who noted that in Victorian-era London he was a freak but in late ’70s San Francisco he’s an amateur…and the film lover will say “yup, definitely….I know that guy.” Or Spicer Lovejoy, the snooty manservant and bodyguard of Billy Zane‘s Caledon Hockley in Titanic.

But very few will name the actor who played these characters — David Warner.

For me the seminal Warner impression will always be Henry Niles in Sam Peckinpah‘s Straw Dogs (’71), although I could never figure out several things about Niles, whom one of the tough-guy characters calls “you bloody pervert.” Which Niles was, in a sense. Or at the very least a creep. He even tried to sexually attack Susan George during the climax, but it stopped when Dustin Hoffman grabs him by the shoulders, looks in Niles’ watery eyes and shakes his head in a stern no-no fashion.

The great David Warner, who was also an excellent stage actor, has expired at age 81.

Sorvino Ruled In The ’70s, ’80s and ’90s
The bear-like, Brooklyn-born, large-of-spirit Paul Sorvino has passed at age of 83. I ran into Sorvino at the Westport Country Playhouse tavern in '77 or '78, and what an aura...he was probably a little bombed but full of feeling and come-what-may passion...I smiled and patted Sorvino on the shoulder in a brotherly way and said "Yo, The Gambler!" and he went "oohhhh, yeah, yeah." I was referring to Hips, the loan shark in Karel Riesz and James Toback's 1974 film, and that moment when he tells a deadbeat gambler who owes more than he has "you worthless contemptible deadbeat motherfucking dog...die!" Yes, his defining performance is Paul Cicero in Goodfellas ("Now I gotta turn my back") but let's not forget his performances in The Day of the Dolphin, Bloodbrothers, The Brink's Job, Cruising, Reds (Louis Fraina!), That Championship Season (Phil Romano!), Dick Tracy ('Lips' Manlis!), The Firm (Tommie Morolto!), Nixon (Henry Kissinger!), and Bulworth. Login with Patreon to view this post
July 25, 2022 12:34 pmby Jeffrey Wells

“I had a difference of opinion with a woman I’m working with. I did something I thought was funny, and it wasn’t taken that way.” — Bill Murray to CNBC on or about 5.21.22.

Murray might have been referring to Being Mortal costar Keke Palmer, but there was another woman costar on that Aziz Ansari film — Christina Lanoux. But what are the odds that Lanoux, a woman with only one previous feature credit (Straight Outta Compton) from 2015, would throw a huge hissy fit and thereby halt production? What are the odds that Murray had any kind of substantial back-and-forth relationship with Lanoux during filming of Being Mortal? Ask yourself that.

Friendo to HE: “A studio wag says that Murray dropping out of Wes Anderson‘s Asteroid City over Covid is a convenient excuse, and that he’s heard that Murray isn’t insurable due to Being Mortal not restarting based on whatever antics he pulled.”

HE to friendo: “Murray suddenly isn’t ‘insurable’? Murray is known for behaving curiously and sometimes obnoxiously during filming, but he’s been that way for at least 40 years. A bit of an odd duck, but I know him a tiny bit (press junkets, party chats, watched him work during filming of Monuments Men in Germany) and he’s just colorful Bill. He likes to goof off and have fun but he doesn’t suffer fools.

“What do you do when you can sense that a certain actor (not Murray) is a defensive piece of work and a temperamental Millennial time bomb who’s ready to over-react to any identity-related issue at the drop of a hat?”

Friendo to HE: “In these agitated times a diva’s weaponry can possibly deliver an unfair kill shot, thanks to the fear caused in suites inhabited by invertebrate corporate hacks. Would another studio allow a filmmaker to hire Murray with the last film shut down and not restarted due to his supposed on-set conduct? They’re risk averse.”

HE to Tar director-screenwriter-producer Todd Field:

“That Tar teaser I just watched is one of the best movie teasers I’ve ever seen IN MY FUCKING LIFE…no lie, straight cards, on my knees.

“It’s so good that I wonder if or how the film itself can live up to the promise, but let’s be optimistic and presume as much. But it really is the shit, man…I LOVE THIS EARTH-SHAKING TEASER.

“I fully expect to see Tar in Telluride…caaannn’t wait.”

Ghastly Slaying That Launched A Movement
Roughly ten months after the airing of Women of the Movement, a six-part ABC miniseries about the horrific 1955 murder of Emmett Till and the relentless pursuit of justice by his mother, Mamie Till Mobley, Chinonye Chukwu’s Till  (Orion, 10.7), a theatrical feature that apparently tells a similar story, will debut at the 60th New York Film Festival. Login with Patreon to view this post
July 25, 2022 9:52 amby Jeffrey Wells

Wait…they gave The Black Phone, which is absolutely substandard, a B-plus? They gave the abysmal Jurassic World Dominion an A-minus? Do they ever give anything a C or a D, or at least a B-minus? 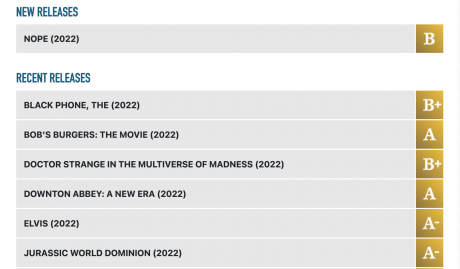