Certain George C. Scott recollections about the never-seen Dr. Strangelove pie-fight sequence were recently posted on Facebook by director-writer Patrick Reade Johnson. Johnson directed Scott in Angus (’95), and presumably got the following from him during shooting.

I’d never read Scott’s story until this morning, and I have to say two things. One, I don’t believe that Strangelove director Stanley Kubrick would have behaved in the petty, wimpy, small-minded way that Scott describes. And two, I’ve found a photo of Kubrick directing Scott during the pie-fight sequence so take the following with a grain:

Johnson: “Scott told me a couple great stories from the Strangelove shoot. One contradicted a popular myth about the film — that the removal of the pie-fight scene was due to concerns over a line in which Scott’s General Buck Turgidson (or someone else in the scene) said, ‘Gentlemen, our beloved president has been struck down in the prime of his life!’ It was deemed insensitive in the wake of JFK’s assassination. 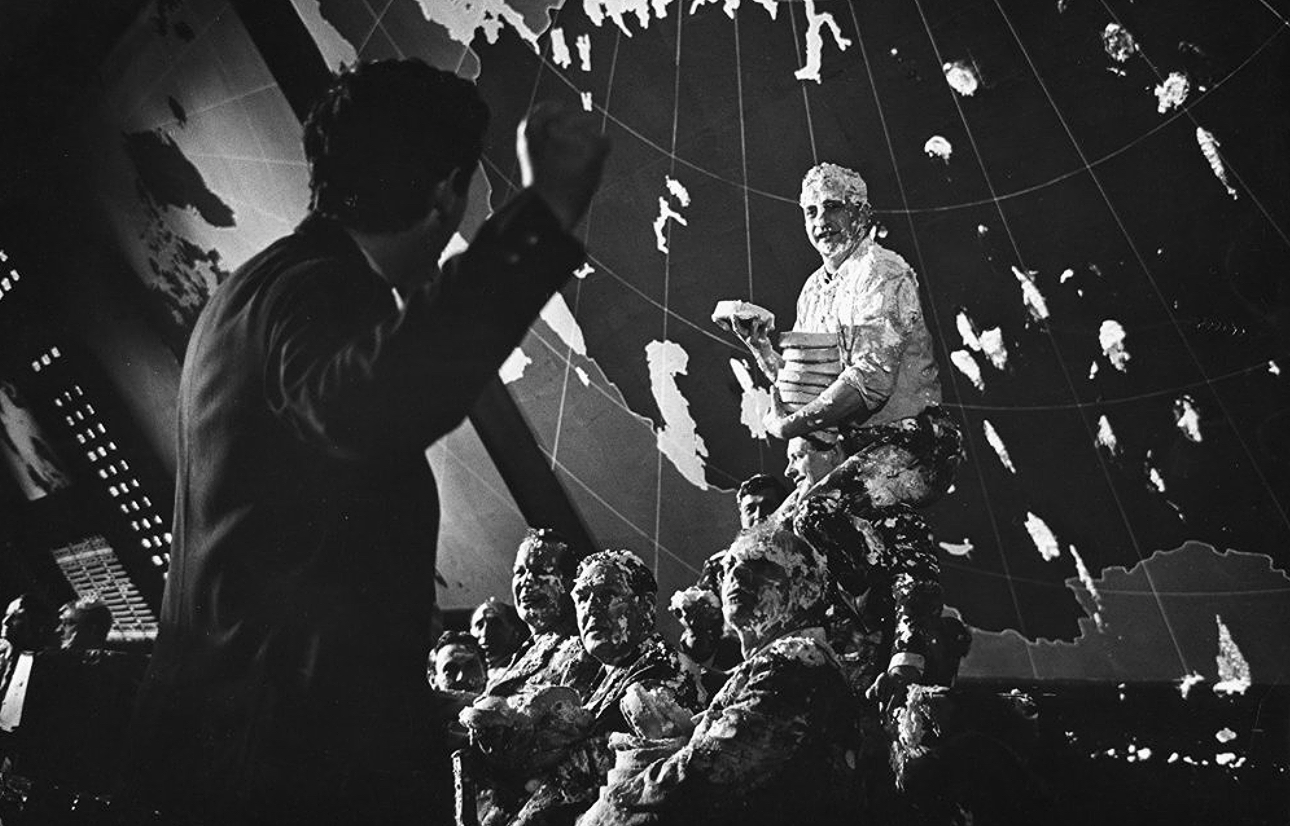 Obviously the rear angle means we can’t be 100% certain this is a shadowed Stanley Kubrick directing the pie-fight sequence, but it sure looks like him.

“’Bullshit!’, roared George, when asked about it. ‘The scene was terrific! Which is WHY Stanley CUT it!” George’s eyes narrowed, a big, toothy grin spreading across his face… “Because the sonofabitch didn’t DIRECT it! THE FIRST A.D. DIRECTED IT!”

“I asked George why Stanley would entrust his first A.D. (possibly Eric Rattray) with directing a high comedy scene, featuring most of his leading cast. And why the venerable actors would even agree to that arrangement.

Scott: “We DIDN’T agree to it! But on the day when we all showed up to shoot the fucking scene, including the guy with 500 goddamn pies, Stanley was nowhere to be found! We sat around on our asses for an hour or so, until the 1st A.D. walked in and said Stanley had a terrible cold…ALL OF A SUDDEN…and that he wouldn’t be able to work today.

“But then he added that Stanley had also said that if we didn’t forge on without him, the scene, which everyone LOVED, would NEVER get DONE!”.

Johnson: “But what about JFK and being sensi—“

Scott: “OH, what a load of CRAP! Stanley couldn’t have cared less about that! If ANYTHING, he PROBABLY HATED not having something so GODDAMN IRREVERENT in his FILM! He just didn’t hate it as much as he hated his First A.D.’s goddamn DIRECTING!”

Johnson: “Wow, and all because he had a cold that day.”

Scott: “Oh, for Christ’s sake, kid! Stanley didn’t have a goddamn COLD! What he HAD…was his fucking JACKET…his FAVORITE GODDAMN SPORT COAT…that he wore EVERY GODDAMN DAY for the whole GODDAMN SHOW! And it was an AWFUL thing! With CIGARETTE HOLES and FOOD stains and RIPPED SEAMS and GOD it was just AWFUL… But HE LOVED IT. It was like his GODDAMN TEDDY BEAR or something!

“Anyway, the night before the big pie fight scene was supposed to be shot, Stanley walked up to me, with these HUGE GODDAMN TERRIFIED EYES and he leaned in, real close, and whispered ‘George…I’m really nervous about tomorrow’s pie fight scene.’ And I said, ‘WHY? It’s HILARIOUS!’ And he said, ‘It’s just…I’m very worried the crew might take the opportunity to extract some kind of good-humored revenge on me, for being, well, you know…me. And if they did, and I got hit with a bunch of cream pies…it might, well, ruin my jacket.’

“I sat there dumbfounded, and George grinned again and said, ‘And THAT, my friend, is the REAL reason the pie fight scene was cut out of Dr. Strangelove! And, I’ve never told anybody that story before! And I’ll deny it in court that I ever said ANY of it if you repeat it! But someday, when I’m gone, you go ahead tell it, and set the GODDAMN record straight!'” 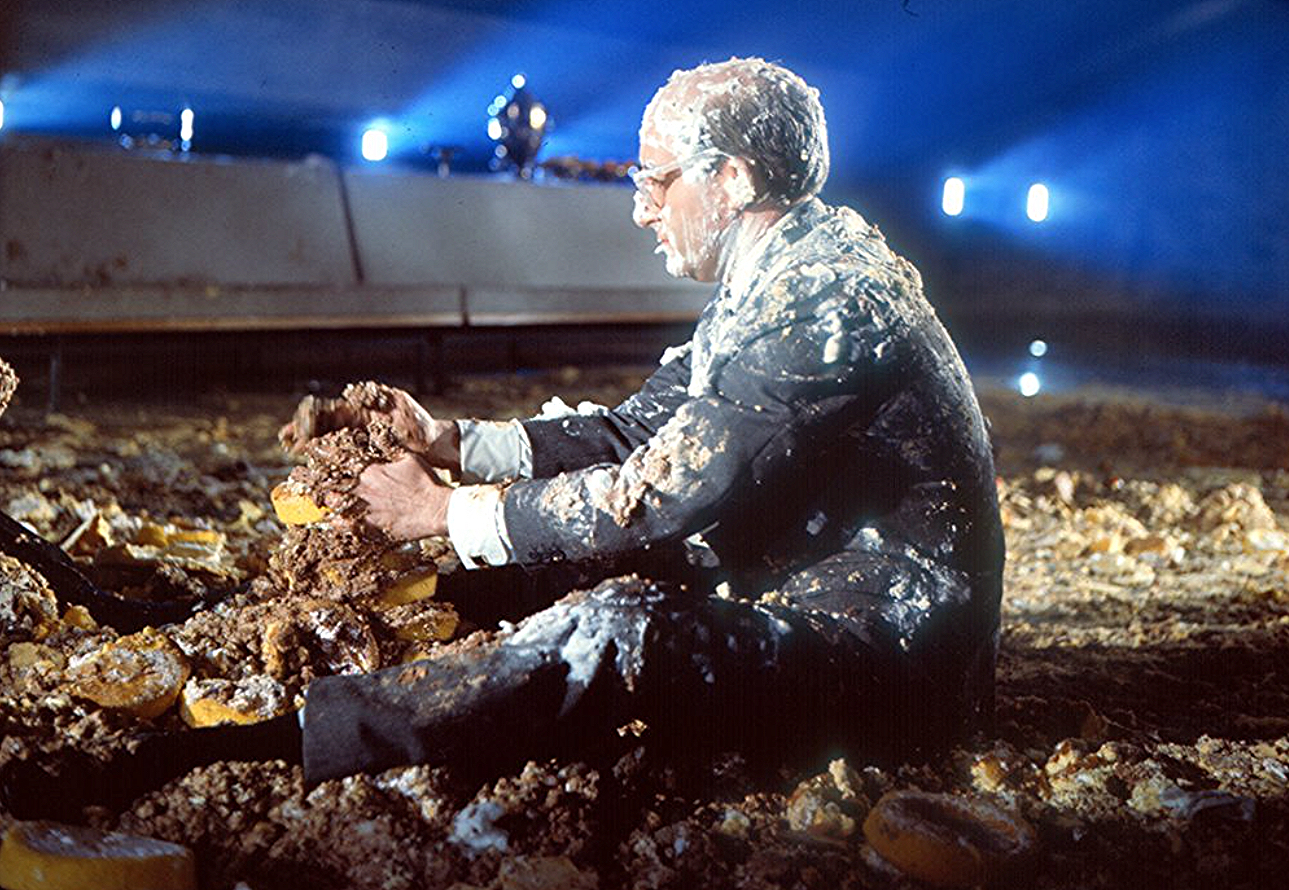