Indiewire‘s Eric Kohn, a kind of philosophical Moses when it comes to articulating wokeness, has written an 8.13 column titled “From Blonde to Star Wars, Hollywood Needs to Accept Actors’ Accents.”

Right away you’re thinking okay, Kohn is going to argue that it’s not the performances that matter these days, but the representations. Which he more or less does.

Okay, the performances matter to some extent, but probably not as much as the electrifying idea of a Cuban-born woman playing Marilyn Monroe with the accent of a Cuban Airlines flight attendant….that’s something to really feel good about and celebrate.

It follows, naturally, that anyone who has a problem with a Cuban-accented Marilyn is a bigot.

Kohn is also going to argue, you’re thinking, that Moses Ingram‘s Baltimore street accent fits right into the Obi-Wan Kenobi universe without a hiccup, and that anyone who complains about Ingram not speaking in the crisp British speech patterns of previous Imperial villains (a tradition that goes back 45 years) is also a bigot, or at the very least someone who doesn’t get it.** 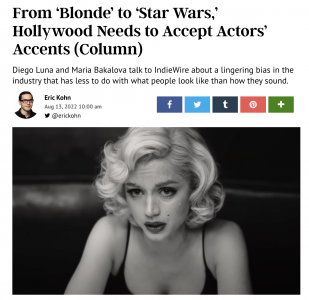 But Kohn doesn’t argue this. He kinda dodges the issue, in fact. He implies, of course, that people who’ve expressed concerns about Ingram’s Obi-Wan performance are racists (he wouldn’t be a good wokester troubador if he didn’t) but otherwise he doesn’t even allude to the arguments that ensued after Obi-Wan premiered.

As for the Blonde star, he relies on a quote from Bodies Bodies Bodies costar Maria Bakalova, to wit: “I think Ana de Armas is an incredibly talented actress and that’s what should matter. It sounds like she has her natural accent and it should be about the feeling you get from the performance.”

Due respect but no. Armas is playing an iconic superstar whom everyone knows rather well, and who spoke with an unmistakably homespun Los Angeles accent. I think it’s silly for anyone to play her with a Cuban accent, or for that matter a British, Russian or Australian one. We’re all residents of the planet earth and we all know what goes so why are we playing games when it comes to portraying famous people? It invites derision.

If you’re going to dye your hair platinum blonde and wear all those flashy Monroe outfits (as de Armas did) you’re obviously making a stab at physical resemblance, so speaking-wise you should at least try to sound like her. Or allow yourself to be dubbed. (You know what would’ve been cool? If tech guys had digitally reconstituted Monroe’s voice into micro-vowels and micro-consonants and then dubbed AdA with Monroe’s actual voice, so to speak. Seriously.)

The next time they make a movie about John F. Kennedy, how about casting Gael Garcia Bernal in the part? Okay, so Bernal is six or seven inches shorter than Kennedy was and he doesn’t resemble him even slightly, but the important thing would be the representation aspect…right, Eric?

Last night I finally saw King Vidor and Ayn Rand‘s The Fountainhead (’49), start to finish. (I had previously only seen clips from the rock quarry scene.) I was amused and at times frustrated, but never bored. And that’s saying something.

For this is one crazy, bizarre and curiously obstinate film of ideas (individual vision vs. collective go-alongism**) and ardent sexuality (i.e., Gary Cooper‘s Howard Roark putting the high hard one to Patricia Neal‘s Dominique Francon).

It’s not at all realistic or convincing as far as anyone’s idea of human behavior is concerned, but it’s certainly been written with a capital “W” by someone with a strong (as in “listen to me….no, really listen!”) point of view about vision vs. commerce, that someone being Rand, of course.

It’s a nutty movie, but at least it understands itself and stakes its philosophical claim and lays the Randian agenda face up on the table — take it or leave it.

Howard Roark is a gifted, strong-willed architect of principle who won’t be compromised or pushed around, not to mention a tough, brawny fellow with a pulsing, rock-hard donkey schlong who knows how to slam ham like a champ.

I can’t say The Fountainhead is an especially good film, but at least it’s ballsy in more ways than one, not to mention plain-spoken.

The Fountainhead was shown in 35mm at the Film Society of Lincoln center’s Walter Reade theatre. (Saturday, 8:30 pm show.) It looked clean (scratch-free) and well cared for, but there were almost no decent blacks to be savored in the whole thing. Almost every frame was composed was in varying levels of gray. I’m not saying it looked bad but it had a vaguely diminished, half-milky quality. It didn’t excite me.

Face facts — 35mm prints are getting older and older as speak, and quite often can’t stand up to the sharp, richly hued look of digital.

And my God, poor Patricia Neal! Having vigorous off-screen sex with Cooper must have been great, but that heightened, bug-eyed, flaring-nostrils way of emoting is awful. In just about every scene she’s saying “I can’t deal with my libidinal longing, Gary…I want to be ravaged!!” And King Vidor, who should have known better, actually encouraged Neal to give this kind of embarassing, over-the-top performance. She was 15 times better in The Day The Earth Stood Still (’51), 25 times better in A Face in the Crowd (’57) and 50 times better in Hud (’63).

Friendo to HE: “Neal was only 22, It was her second film after a Ronald Reagan comedy shot a few months previous.”

HE to friendo: “Okay but what’s Vidor‘s excuse? He was in his mid 50s during filming — by any yardstick a seasoned director who knew the ropes. And yet he encouraged Neal to deliver almost a parody of a sexually charged performance. Good God. Two years later, at age 24, Robert Wise guided her into a fully believable, calmly centered, first-rate performance in The Day The Earth Stood Still. That flared-nostril stuff isn’t on her — it’s on Vidor.”

** In today’s world Howard Roark would be written as a courageous anti-wokester (i.e., someone like myself) and the villainous go-alongers would be modelled upon the you-know-who brigade (Eric Kohn, Anne Thompson, David Ehrlich, Elizabeth Wagmeister, Clayton Davis, Tom O’Neill, the Toronto Film Festival Stalinists, etc.).

A MOMA-supplied 35mm Technicolor print of King Vidor’s Duel in the Sun (‘46) screened this afternoon at the Lincoln Center Film Society’s Walter Reade theatre, and man oh man oh man…they got me.

The images were so dark and murky you could only see about half of what had been captured by dps Lee Garmes, Ray Rennehan and Harold Rosson. The rest, it seemed, was hiding in shadows, smeared with lentil soup, covered by a scrim.

Even the brightly lighted Technicolor Selznick logo sequence (the Gone With The Wind Bluray delivers a perfect rendering) looked like it was shot during a solar eclipse.

I was told by management that it wasn’t a case of poor illumination (the projectionist told a theatre employee that the image was lit by 16 foot lamberts) but a dark–ass print. Besides the lack of sharpness (the clarity difference between Duel and GWTW is like night and day), the cinematography had a generally thick and heavy quality. Nothing looked beautiful; it was horrendous.

I got up and left around the 40-minute mark. “Why am I watching this?” I muttered to myself. “I feel like I’m going blind.”

These DVD Beaver screen captures from a 2017 Kino Bluray simulate the difference between a properly illuminated Duel in the Sun image (above) vs. how it looked inside the Walter Reade (below) — the projected images actually looked worse than this.

The projected main title sequence looked dark and muddy — it didn’t pop in the slightest. This is how it should have looked (but didn’t):

I struck up an acquaintance with Michael Mann in the summer of ‘97, when I was working as an in-house People freelancer. He knew I was a fanatical longtime fan, etc. One afternoon Mann invited me over for a brief sitdown at his office (Olympic near Bundy), and it was strictly about feeling me out. No quotes or notes.

It was right in the first cautious blush of that relationship that Mann allowed me to look at a James Dean screen test that Leonardo DiCaprio performed in ‘93. It was filmed footage on a VHS cassette, and Leo was wearing a red Rebel Without A Cause jacket and ‘50s Brylcream pompadour hair.

The deal was that I couldn’t mention to anyone (not even my mother) that I’d seen it, and there could certainly be no filing of any kind.

I agreed, of course, but I was so knocked out by how well DiCaprio had captured Dean’s expressions during his big scene with Jo Van Fleet in East of Eden (‘55)…I was so turned around that it broke my heart to have to sit on my impressions forever. But now that Mann has discussed the DiCaprio-Dean thing in a chat with Deadline ‘s Michael Fleming, it seems okay to mention my quick peek.

Or more precisely, Christoph Waltz as Blofeld in No Time To Die. That was my first association. I’m sorry but the ogre-ish Cyclops vibe (i.e., not Gene Hackman in Superman) does something to me. Nobody has ever approved of Trump’s hair, but this proves he needs some kind of dramatic hair statement to make it all work. (I’d like to credit the CG guy who composed this but I’ve lost track of the original.)

It’s fairly unusual — make that highly unusual — when an apparently gifted actress comes along who qualifies as (am I allowed to even say this?) strikingly beautiful.

Captivating brunette actresses were standard issue throughout the 20th Century (they were often favored for their looks back then…a tactic of sexist oppression) but that aesthetic began to fade 10 or 15 years ago. Or so it seemed to me. I won’t argue about this.

To my eyes Mackey is one-third Jamie Pressly, one-third Jaqueline Bisset in her ’70s heyday and one third Lesley-Anne Down as she appeared in the ’70s.

Jodie Comer may or may not be a better actress than Mackey, but she’s cut from a similar cloth.