Everything’s flush, nothing is real, living is easy and everyone in your hallowed orbit is either a dear friend, a close acquaintance or a devoted assistant…I’m drowning here…”don’t surround yourself with yourself…move on back two squares.”

The tide has been turning against Elvis for several weeks now. Everyone has more or less the same complaint — it’s too slick to trust, isn’t genuine or human-level sincere, too whirlygig, aggressively selling itself to a fault…except for the final Vegas section, which is pretty good.

An official Academy letter was sent by Academy president David Rubin to Sacheen Littlefeather [aka Marie Louise Cruz] on 6.18.22, but only revealed today. It’s titled “Statement of Reconciliation“:

I write to you today a letter that has been a long time coming on behalf of the Academy of Motion Picture Arts and Sciences, with humble acknowledgment of your experience at the 45th Academy Awards.

As you stood on the Oscars stage in 1973 to not accept the Oscar on behalf of Marlon Brando, in recognition of the misrepresentation and mistreatment of Native American people by the film industry, you made a powerful statement that continues to remind us of the necessity of respect and the importance of human dignity.

The abuse you endured because of this statement was unwarranted and unjustified.

The emotional burden you have lived through and the cost to your own career in our industry are irreparable. For too long the courage you showed has been unacknowledged. For this, we offer both our deepest apologies and our sincere admiration.

We cannot realize the Academy’s mission to “inspire imagination and connect the world through cinema” without a commitment to facilitating the broadest representation and inclusion reflective of our diverse global population.

Today, nearly 50 years later, and with the guidance of the Academy’s Indigenous Alliance, we are firm in our commitment to ensuring indigenous voices—the original storytellers—are visible, respected contributors to the global film community. We are dedicated to fostering a more inclusive, respectful industry that leverages a balance of art and activism to be a driving force for progress.

We hope you receive this letter in the spirit of reconciliation and as recognition of your essential role in our journey as an organization. You are forever respectfully engrained in our history.

Quentin Tarantino‘s script of Inglorious Bastards seems twice as fake as the Italian village in Blake Edwards‘ What Did You Do in the War, Daddy?, and that was pure mid ’60s Hollywood bullshit. It’s faker than Hogan’s Heroes, even. If Tarantino has done any research about France, Germany or any World War II particulars other than watch World War II movies, I’ll eat my motorcycle tool kit.

He doesn’t care, of course, and that’s why he’s Quentin Tarantino. You can feel him in his element, living in his head and flaunting a clever, dumb-ass yarn that entertains every step of the way, and — this is the cool part — in a kind of oddly sophisticated fashion. Which is what he’s been doing since Pulp Fiction.

The spelling errors, I have to say, are a complete hoot. Something in me refused to believe that Tarantino is just a spelling moron. He’s either an idiot movie savant of some kind, or he sat down and decided to deliberately misspell stuff in order to give the people reading it a little tickle. Toying with them, flaunting his supposed illiteracy, but doing it to a degree that seems a wee bit insincere.

That said, the errors may be dead real, and if so it’s almost impressive on a certain level. Tarantino could have easily told a freelance editor to clean up the mistakes. The fact that he didn’t spells confidence.

Over and over he writes “heer” rather than “Herr,” the German name for mister. He writes “merci be coupe” when he means “merci beaucoup.” There’s a line that goes “the Feuhrer himself couldn’t of said it better ” when he means “couldn’t have said it better.” He tries to pluralize the French-Jewish family name Dreyfuss to great comic effect. We are told that the Dreyfuss family includes a mother named “Miram” and a brother named “Bob.” (“Hey, Bob, get me one of them there quawssaunts, would ya?”)

He spells Dr. Goebbels as Dr. Gobbles…gobble, gobble! (And then he spells it “Geobbels” later on.) Tarantino seems constitutionally incapable of typing the word “you’re” — he has to write “your” every time. We’re told at one point that “there gonna die” instead of “they’re gonna die.”

This is too dumb, too hayseed. It has to be a put-on.

And then comes an American GI character from Boston named Donny who carries a baseball bat and has come to be known as…I won’t say it, but it’s genius-level. (And I’m not being snide.) The nickname for Brad Pitt‘s Lieutenant Aldo is Aldo the Apache. (Because of his penchant for scalping Nazis.) There’s a great scene with a German Sgt. Rachtman being interrogated by Aldo and his men, each one of the Hebrew persuasion, and Rachtman being asked where some nearby German troops are holed up, and he answers “fuck you and your Jew dogs!”

We’re introduced to Jewish characters named “Mr. Goorowitz” and “Mrs. Himmelstein”? These are names from a ’50s comedy skit on Your Show of Shows or The Jackie Gleason Show.

Over and over it’s “Basterds” this and “Basterds” that — why is the “b” capitalized? At one point a character is asked, “How did you survived the ordel?” (This is an exact transcription.) Tarantino even spells “gimme” wrong — “gimmie.”

One of the most barbaric and morally repellent scenes in war-movie history happens in Quentin Tarantino‘s Inglourious Basterds (’09).

I’m speaking of the baseball-bat murder of an anti-Semitic German soldier — Sergeant Werner Rachtman (Richard Sammel) — by Sergeant Donny Donowitz aka “The Bear Jew” (Eli Roth). Rachtman isn’t murdered for his racist beliefs, mind, but for refusing to betray his fellow German soldiers by helping the Americans to capture or kill them.

I’m sorry but it my book a soldier who refuses to help the enemy slaughter his comrades, even at the cost of his own life and even if he harbors ugly and inhuman attitudes, is honorable.

Originally posted on 8.24.09: The moral scheme in Inglourious Basterds decrees that German troops were serving an evil criminal regime and therefore THEY, the troops, were evil and criminal as well as viciously anti-Semitic, so snuff ’em out like rats. Shoot ’em, club ’em, exterminate ’em.

IGB is basically a table-turning game in which Tarantino decided to have fun by letting Germans suffer en masse the way Jews suffered en masse at the hands of the SS and other Nazi command types who carried out the Holocaust.

Consider looking at this situation from the other side of the coin.

It is still shocking news to some ostrich-heads out there that Americans were the bad guys in the Vietnam War (i.e., a great industrial nation coming down full-force upon a peasant society and calling out the furies). By this token the troops who served this policy were bad guys as well, or even, if you want to really fulminate and get angry about it, just as bad as average German grunts were “bad” for serving their side during WWII.

Except grunts are grunts. They don’t formulate policy. They sign up and go through basic training and shoot the enemy and try to survive so they can come back to their families. And yet by the standards of some, U.S. grunts serving in Vietnam were okay and just trying to get through the Vietnam War — regular guys, one of us, etc. German grunts, on the other hand, were evil and deserved to be slaughtered with baseball bats.

IGB is playing a facile, cheap and repugnant game. Two vicious wrongs really don’t make a right, guys. And by relishing the idea of slaughtering average-Joe Germans — by revelling in their elimination like cheering baseball fans in the bleachers — Tarantino degrades the morality of Jewish survivors…indeed, the moral residue of the entire horrific Holocaust experience.

I’ve always approved of Quentin Tarantino‘s Once Upon A Time in Hollywood, but in a limited way. I’m okay with first four-fifths but truly in love with only the final fifth. So I can’t really put it in the same Olympian category as Reservoir Dogs, Pulp Fiction and Jackie Brown — QT’s three finest films.

I’m still saying, in short, that his 21st Century films, pleasing to many and commercially successful to boot, don’t compare to the cornucopia of the glorious ’90s (which includes True Romance and his dialogue polish of Crimson Tide). He had the heat for 10 years, and over the least 22 years he hasn’t. He’s done fine work but the electric God current took hold and shot through his system during the Bill Clinton years, and then it flew away. 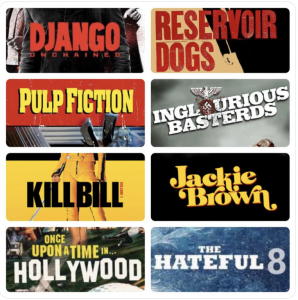 Despite God knows how many millions of fellows having shared an intense attraction to attractive female peds, there’s a reason why directors and cinematographers almost never include MCU insert shots of bare feet in feature films. It’s because oddly proportioned feet have a way of interfering with damn near everything. Over-sized big toes in particular.

This is apparently a real-world conversation, but if it’s from a film the screenwriter is quite brilliant. In a single line the woman (i.e., the object of the man’s earthly devotion) conveys what serious emotional insecurity (or serious wackadoodle) is, and we realize at once that the relationship is doomed. In one line. A Waldo Salt screenwriting trophy.

There is no such thing as a horror comedy. You can make one and call it that, but in my eyes it’s a non-starting bullshit sub-genre that’s fatally stricken before it even gets off the ground. I can’t wait to see it tomorrow. Not.

This wouldn’t be worth touching but it’s Sunday afternoon so what the hell. Sometime in the mid ’70s Joan Crawford shared a complaint about the sexual explicitness of Last Tango in Paris, and particularly about a nude scene performed by “fat” Marlon Brando, she claimed. Brando certainly became a sea lion in the ’80s, ’90s and early aughts, but when Tango was filmed in late ’71 and early ’72 Brando (born in ’24, 47 at the time) was relatively trim. He wasn’t even stocky. Born in ’05 or thereabouts, Crawford was around 70 when she shared this opinion. She passed in ’77 at age 72, give or take. 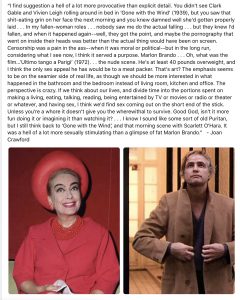 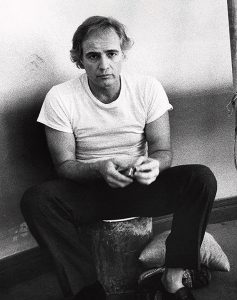 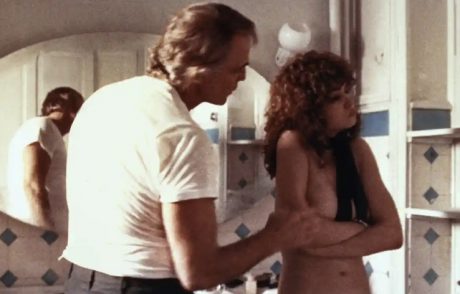 Style Conscious
I'm not blaming poor Barron Trump for being the son of Beelzebub. The resemblance is fairly strong, yes, and yes, he seems to be in the early stages of developing a Donald bod. And being 6'7" isn't that extreme -- Barron is still six inches shorter than the late Richard Kiel (aka "Jaws"). But it's not cool for a 16 year-old to wear dad jeans. He should know that.